Flavour at its finest, service at its best, experience why the Courtyard Restaurant has been a top dining destination in the Nation’s Capital for 40 years.  Your table awaits…

Since 1827, the building at 21 George Street has been a witness to history – and for much of its past, a home to hospitality.

1827 – First constructed as a log tavern that quenched the thirsts of the workingmen whose labour gave birth to Bytowne (Ottawa’s original name), an eventual addition transformed the building into the modest McArthur House Hotel. Our largest dining room, the McArthur Room, is named after the first building on this site.

1837 – By 1837, much of the original building was gone, and like many of the wooden shanties of the early city, it had been replaced by a structure made of locally quarried limestone. It was known briefly as the Ottawa Hotel, and later as “McArthur’s British Hotel”.

1865 – Construction for a new wing began and the building would eventually be leased to the newly minted federal government to house a garrison of 150 men charged with the task of protecting Governor General Lord Monck. While the military deserted the building in 1871, it stayed long enough to leave its mark – the courtyard is the site of the last military hanging.

1875 – From 1875 to 1880, the building was refurbished and operated as the “Clarendon House Hotel”. Following this venture, 21 George served as headquarters for the Geological Survey of Canada, and later, a branch of the Mines department, until the middle of the Second World War.

1978 – After decades of sitting empty, the NCC began the renovations to transform 21 George into the Courtyard Restaurant. While the restaurant first opened in July 1980, just 5 weeks later a fire in an adjoining building caused the new restaurant to close for repairs until November.

And the story continues… lead by imagination and innovation, the Courtyard Restaurant moves towards the future with the goal of being home to your finest dining experience.  We invite you to help us to make history – and to create memories that are as rich and as full as our past. 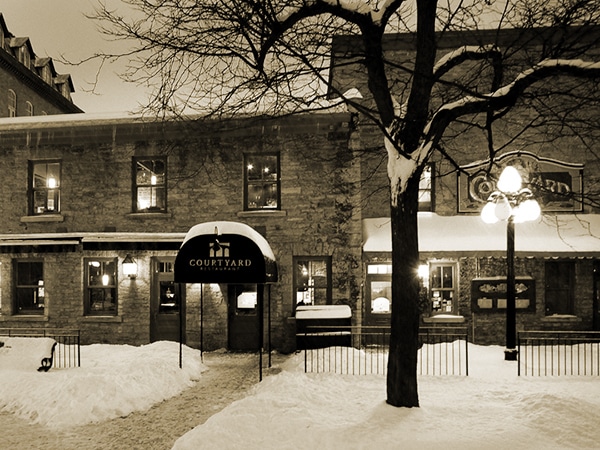